This weekend was better. Thankfully payday was midweek so we were able make a trip to the local reclamation yard, J. Brant Reclamation Ltd, on Saturday and buy the rest of the sleepers we needed. This was a big investment, both in money and in the back-breaking effort it took to move them. 14 sleepers @ £21 each means £294 gone from the bank balance, but all in a good cause.

One other thing we bought was a new saw to cut up the sleepers. Struggling on with the angle grinder and hand saw, while looking spectacular, was just taking too long. Decided a circular saw would provide the best balance between cutting ability and cost. And it could be used to cut the wood for the composting bins later. One with reasonable reviews from Amazon was £49.99 and had a cutting depth of 65mm. Given that the sleepers are 125mm thick, we figured that two cuts would cut the sleeper in half … or so we thought. Amazon delivered with their usual speed and efficiency and it arrived on Saturday morning.

Saturday afternoon we took the horse lorry off to get the rest of the sleepers. Fourteen to be precise. Two to finish off the second bed and then 6 more each for the remaining beds. The people at the reclamation yard were very nice as usual and helped us load them in with a forklift truck. The driver really is a dab hand with it so it didn’t take long. 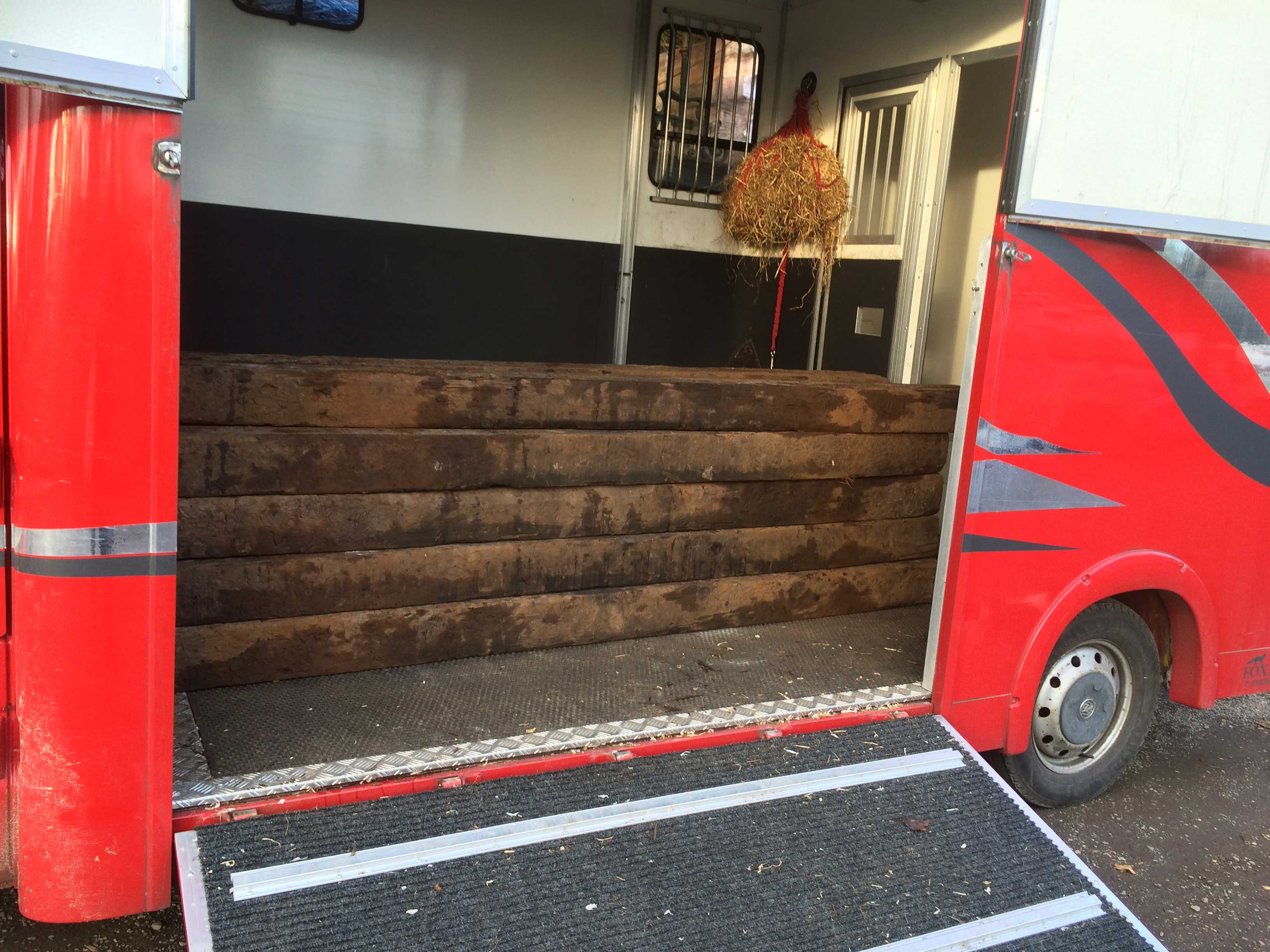 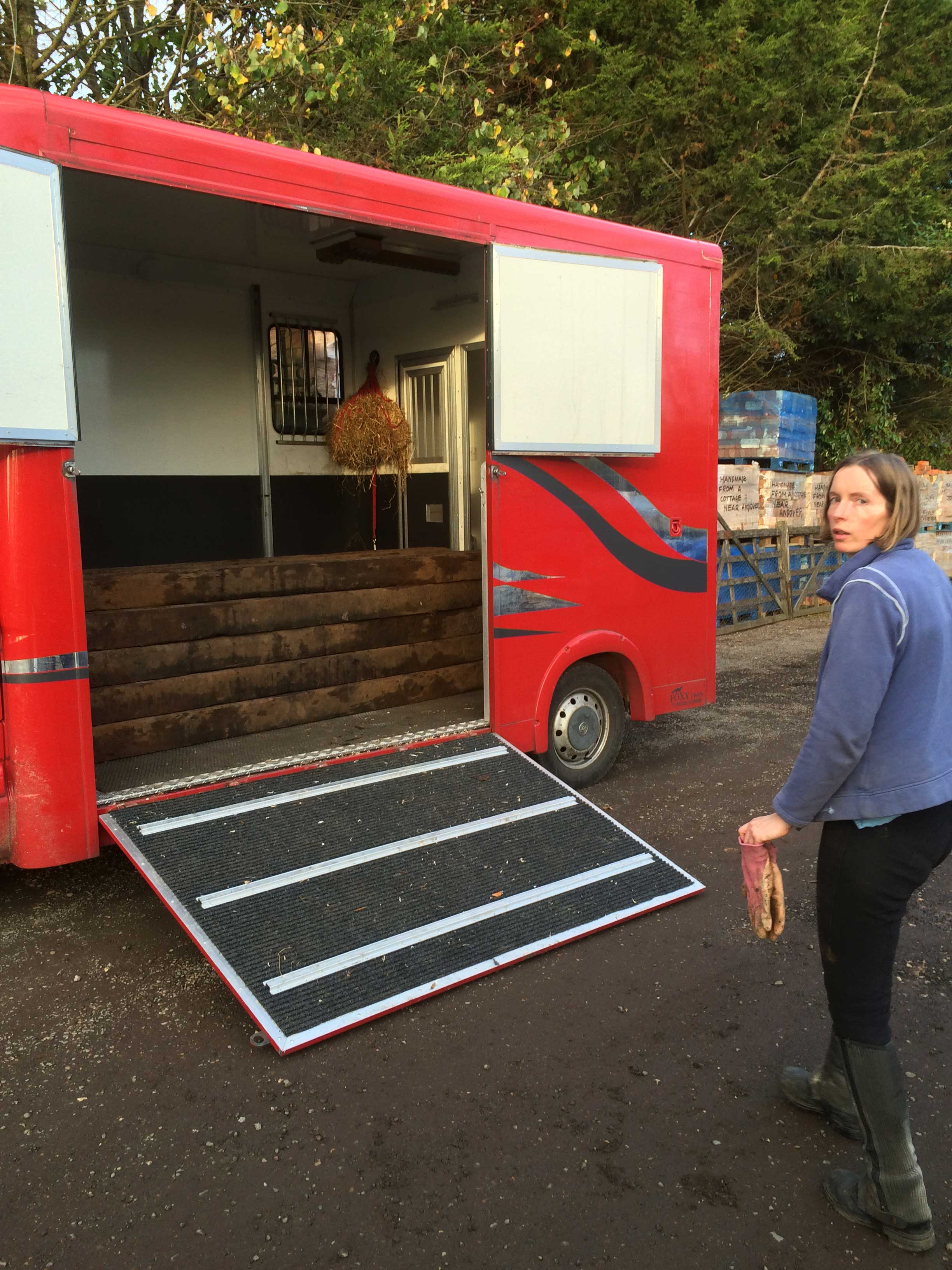 Unfortunately, once home, we had to unload them by hand. From where we can park the horse lorry to the garden is about 50 feet. Doesn't sound a lot but when your carrying a heavy railway sleeper, and having to lift it round a corner, it's a very, very long way. We did six manually, but then decided to pop down to the stables and bring the trolly wheelbarrow back (rated for 120kgs). This was so much easier that it just made us scream and think "Why didn't we do this from the start" :-) 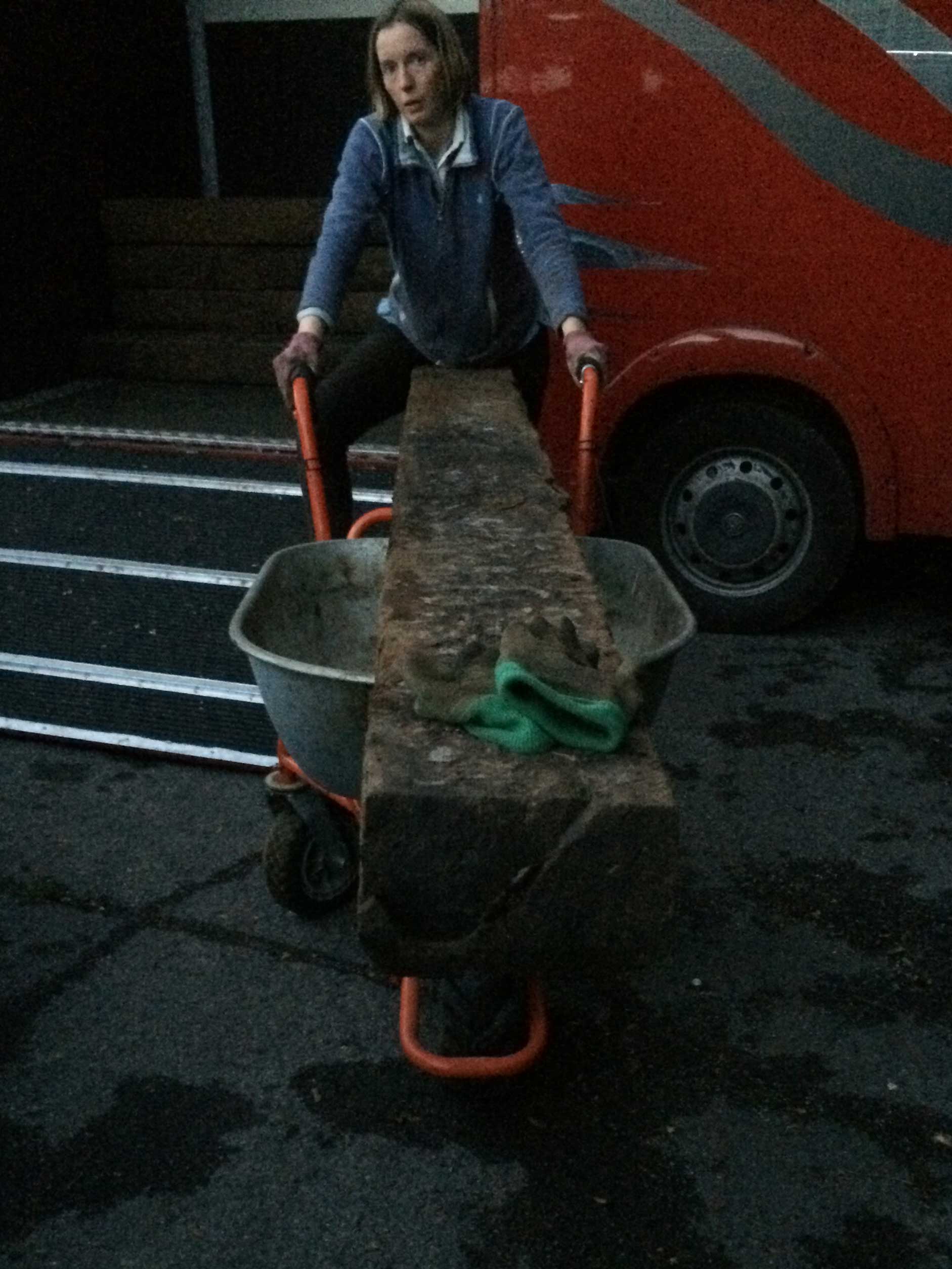 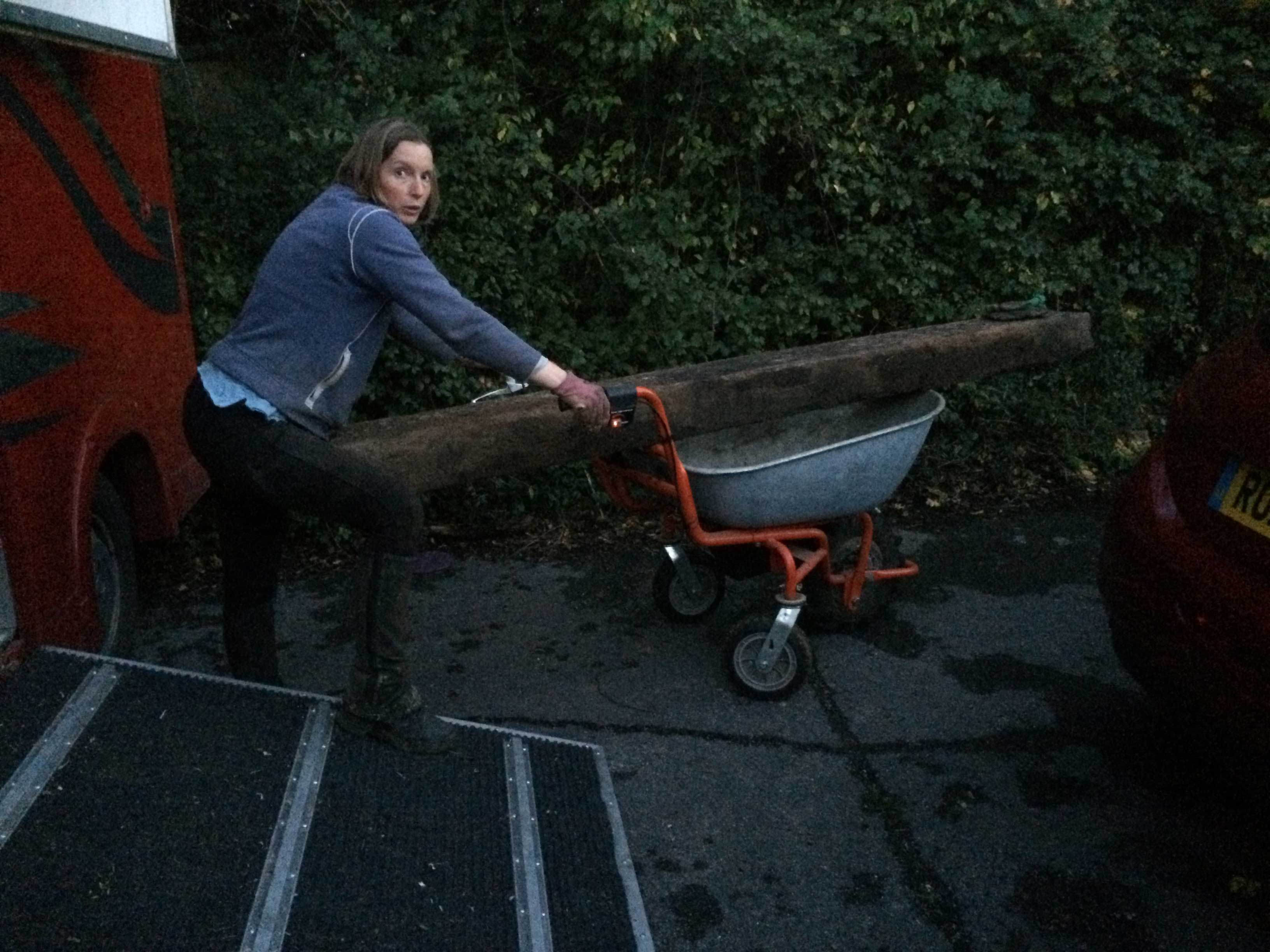 You can tell from the pictures it was getting a bit dark by this time. It’s for working in the garden and with the horses that we really miss the long summer days. We pretty much have to stop working on the garden at 6pm at the moment. Summertime you can work for another 4 hours or so. But for all that we do like the roll of the seasons. Generally we regard winter evening as a time for catching up on all those jobs around the house and for reading by the fire. It’s just our bloody mindedness that we wanted to get this job done for winter so everything would have a chance to settle in and the frost could break the soil in the new beds up a bit.

Anyway back to the plot, getting the sleeper round the corner from the path into the garden gate was the bit we thought would be next to impossible with the sleeper on the wheelbarrow. It turned out to be very easy. Because the wheelbarrow’s got rear wheels and you don’t have to support the weight with a sleeper on it, we just rolled it back and forth until we’d edged it round the corner. Job done. If we ever have to get 24 sleepers into the garden again, we’ll know just how to do it :-)

Having got them all there, we decided to try the new saw out. We were a bit worried having read on the box that it was only supposed to cut timber up to a maximum thickness of 40mm. We were going to cutting to the full depth of the blade and then some. Anyhow we gave it a go, didn’t rush it and gave the blade plenty of time to work. It was great - it went thought it like the proverbial hot knife through butter :-). We turned the sleeper over and made an identical cut on the other wide. Sadly we didn’t get all the way through :-(. It turns out the maximum cut depth is about 50mm, not the 60-65mm the reviews on Amazon had suggested. I’m guessing most people weren’t doing full-depth cuts like we were. However that only left a strip 15-20mm thick in the middle which was quite easy to finish off with the hand saw. Not quite perfect, but much, MUCH easier than our previous attempts.

All sleepers are not equal

Having cut up the two sleepers we needed to finish the second raised bed, we put them in place to check the fit and discovered something that should have occurred to us before. The sleepers are not all the same width. We’d measured them out as being 10” or about 250mm wide. However when we put two of the sleepers together there was a difference in the height of an inch or so. Enough to be annoying. 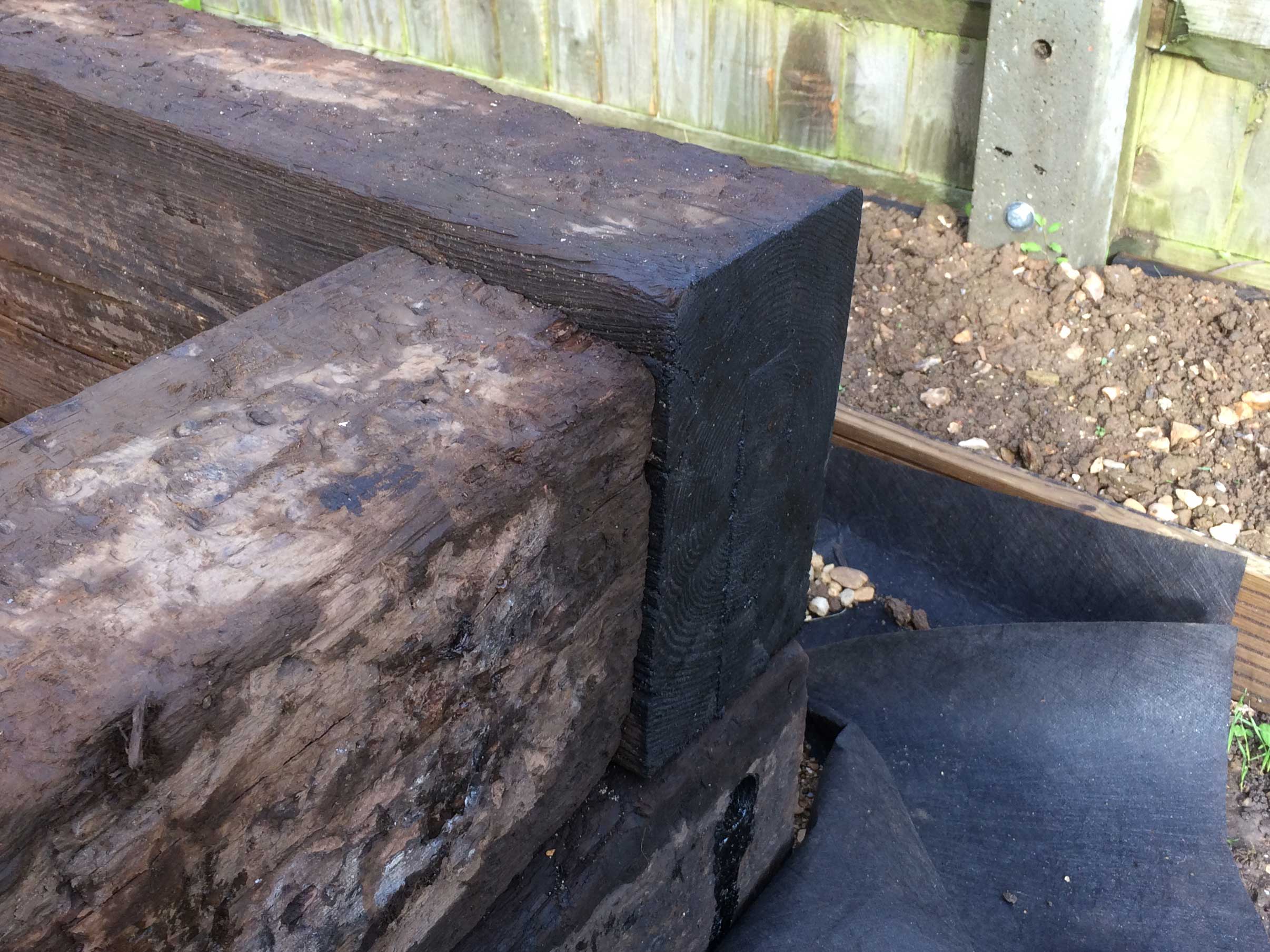 We’d already twigged to the difference in length (see earlier post) and it should have occurred to us that of course the width could vary as well. These things have been in the ground, pounded by trains, for up to 50 years. Of course they’ll have changed shape. We guess we’d just been lucky with the three layers we’d done that they’d been the same height.

Initially thoughts of skimming the sleepers down to a consistent width gave way to common sense. We’ve got 14 sleepers. Just measure all the widths and create matching sets of 3 to make up each layer. KISS is a great principle. Keep It Simple, Stupid! Why make more work for yourself when a few minutes with a tape measure and a pencil can make all the problems go away :-)

End of another week

So this is where we are now. All the sleepers we need in the garden and ready to complete the raised bed construction :-) 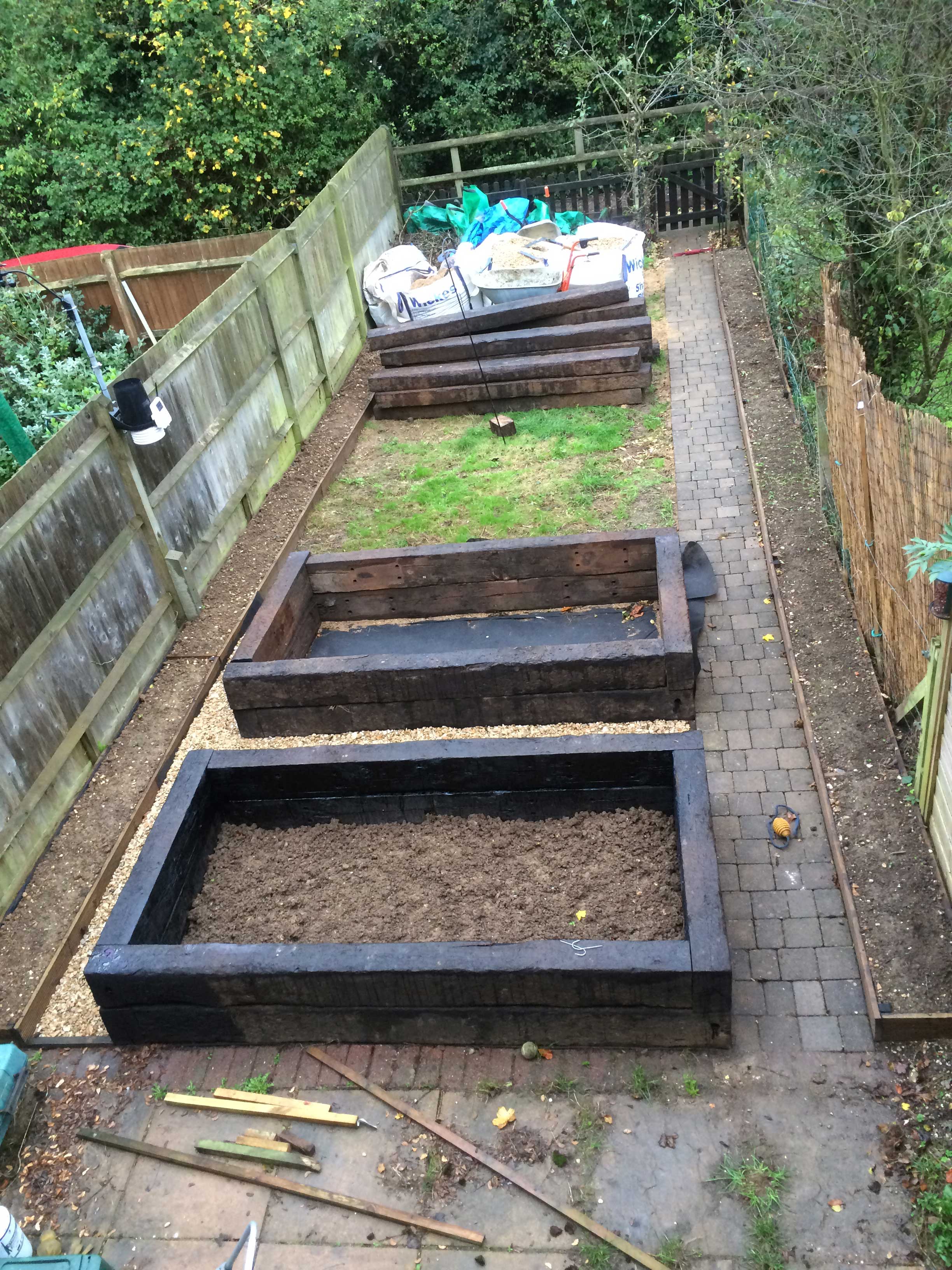