People discovered the home computer. Lots of things were promised, including a brave new world where paper would be a thing of the past, all documents would exist as electronic copies. The filing cabinets would be emptied and would gather dust in this brave new world. The era of the Paperless Office was upon us ...

The Paperless Office (or Home)

That was over a decade ago or more, and the problem was - it wasn't.
Now I admit, I bought into this dream, though not for the office but for the home. I loved the idea that all my paper work could be held on a computer, instantly available, instantly searchable, in no more space than a pack of cards. Problem was most stuff still arrived at home in paper form. Not a issue in it's self, flatbed scanners were relatively cheap. And there were a couple of programs available to the home user at that time. PaperPort was one and PageManager another. I tried them both, and preferred PageManager. The interface was easier to use and some of it's document handling was better than PaperPort. However at that time all the document management systems used proprietary formats for storing scanned documents so making the right choice was fairly crucial. Bear in mind this was well over a decade ago and PDFs weren't universal at that time. Unfortunately PageManager didn't seem to be actively being developed at the time and PaperPort was, so I decided to go with PaperPort.

However it turned out that digitising the documents was a huge chore. So big in fact that, although my intentions had been good, I fell behind and eventually gave up. There wasn't actually a single issue that caused the problem, it was multiple things.

The affordable scanners, even faster ones, were all flatbed. While that gave good image and scan quality it was slow. Each page in a document had to be scanned, then the page had to be manually turned over and the and the other side scanned. Even if the document single sided you had to manually scan the first page, take it out, put the next page in, press the scan button on the screen, and repeat. You could get flatbed scanners with document feeders that would automatically turn pages over and feed the next page in. Problem was they were expensive and because of the mechanics of turning pages over, not very reliable. They jammed, or skewed the pages, or in the worse cases, shredded the pages. Not good.

The second problem was the software itself. It wasn't easy to scan documents, and then they had to tagged with keywords to enable searching. All in all it took 10 or 15 minutes to scan each document. And you couldn't look at the documents outside of the software (remember that proprietary format I mentioned), and even inside the software it took minutes to open up each document if you wanted to look at it.

I gave up. I hate to admit this - I really do - I wanted it to work, but it just took too much and the rewards just didn't justify the effort.

Every so often, in the intervening years, I would try again. But each time the result would be the same, basically the technology and the software didn't really evolve. Eventually they did start to use PDFs to store the scanned documents but that was about it.

3 Things To Make The Paperless Home A Reality

So fast forward to 2012 and, miraculously, I am rapidly moving to realising my dream of a paperless house. So what has change? Three things -

The move from Windows to Apple was driven by frustration. I finally got fed up with periodically having to spend a day sorting out problems with computers, and for seemingly no reason. On Friday everything would be working perfectly, on Saturday computers wouldn't talk to each other or the network, or were having a mystery boot failure, or wouldn't talk to the printer, or couldn't find a share, or the XP machines didn't want to talk to the Windows 7 machines etc. 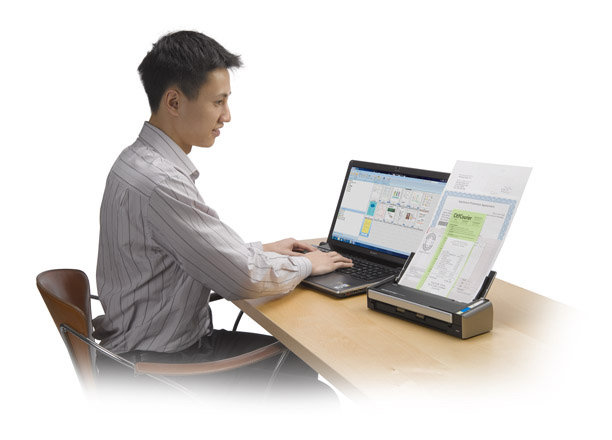 They've now dropped in price to the point where I could actually afford one. The model I have is a Fujitsu Scansnap S1300i - not the cheapest you can find, but still very reasonable. What makes a document scanner different to a flatbed? Firstly it's optimised for handling paper and feeding it through the scanner page by page automatically. Secondly, and this is a big secondly, it actually has two completely separate scan heads which means it can scan both sides of a page at the same time in a single pass. It saves time and means the scanner doesn't have to have any complex machinery to try and turn the page over as it is scanned. It's simple and reliable. You drop the document in the hopper, press the blue button on the scanner and everything feeds through in a quiet, orderly and efficient manner. Very boring and very reliable. 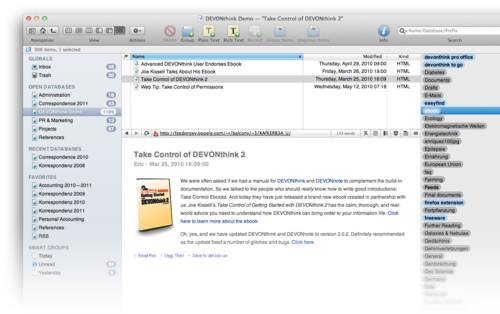 Having switched to Macs gave me access to new software (and lost me a few favourites - I still haven't found a good replacement for Faststone Image Viewer). One of the new pieces of software I found was DEVONthink - it's everything that a document management system should be. It's quick and easy and intuitive and finding things is a doddle.

Getting the document into DEVONthink is beautiful - I just load it into the hopper of the Scansnap, press the blue button on the scanner and sit back and relax. The document is scanned, and the results passed to DEVONthink which digests the results and cogitates. Then DEVONthink pops up a single dialog asking for the name of the document, any tags you want to use and what creation date you want to give it. Finally you drag and drop it into the appropriate folder to file it. Finished.

And did I mention that is stores the results as PDFs and during it's cogitations it's recognised all the text printed on the document (OCR) and made it searchable as well?

So how long does this this take? Scanning an A4 page (both sides) takes 10 seconds, processing it in DEVONthink takes from 50 secs to 80 secs depending on the amount of text. So the total is somewhere from 1 min to 1:30 min per A4 page. The page that took 80 secs to process, by the way, was cover with loads of small print (T&Cs) and it still managed to make it ALL searchable. It is FAST.

Those two key facts have made the paperless office viable, at least for me. It is fast, and DEVONthink's approach to how the electronic documents are created means I only have to touch the new document once. I can fill in everything needed in one dialog. Speed and ease of use.

So roll on the paperless house, it only took a decade but the dream lives and breaths again!

Alternatively if you have a lot of scanning to do you could look at it's big brother the Fujitsu ScanSnap iX500 A4, Duplex Wi-Fi Scanner

"Living in continual chaos is exhausting, frightening. The catch is it's also very addictive." (Lorna Luft)