In the previous post I talked about the possibility of reading the data directly from a Davis Integrated Sensor Suite (ISS) by intercepting the radio transmissions from the ISS to the VP2 Console.

The previous post had links to a set of posts in a blog called It's science, but works like magic that used a Moteino board from LowPowerLab to link to the ISS. This couples a Atmel ATMega328P microcontroller with the RFM69HCW Programmable 315-915Mhz RF Transceiver Module from HopeRF. Unfortunately it's not easy to get hold of the Moteino in the UK. LowPowerLab will ship to the UK, but the shipping costs are more than the unit itself (unit cost $20, shipping $33).

However, Adafruit also produce a number of modules in their Feather range that also use the HopeRF RFM69HCW transceiver, and the good news is, they’re very easy to get hold of in the UK. They have two Feathers with integrated RFM69HCW transceivers that meet the requirements -

I ordered one of each board. The 32u4 variant is closest to the Moteino board in terms of processor, but the M0 is way more powerful. Both arrived swiftly :-). 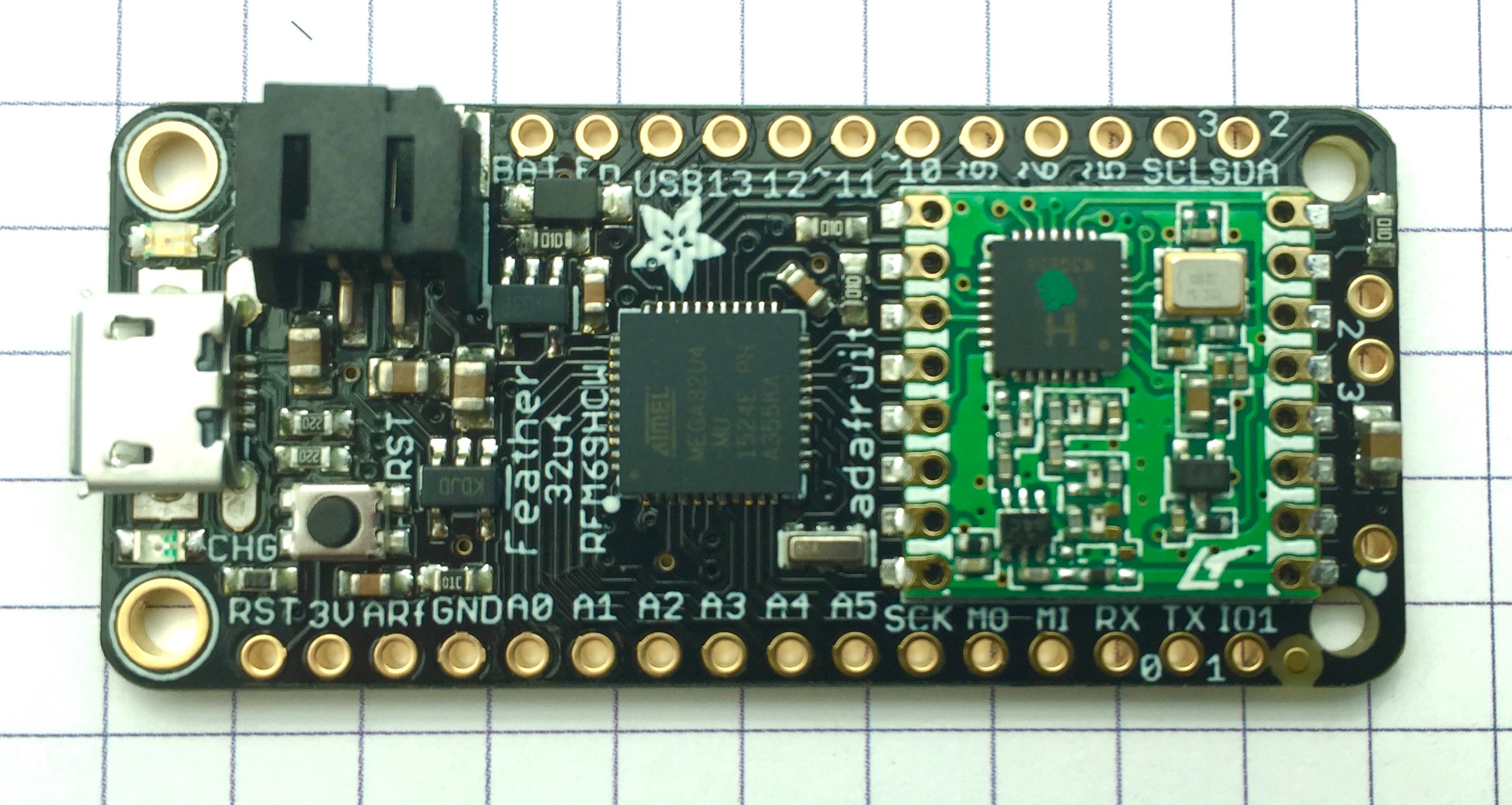 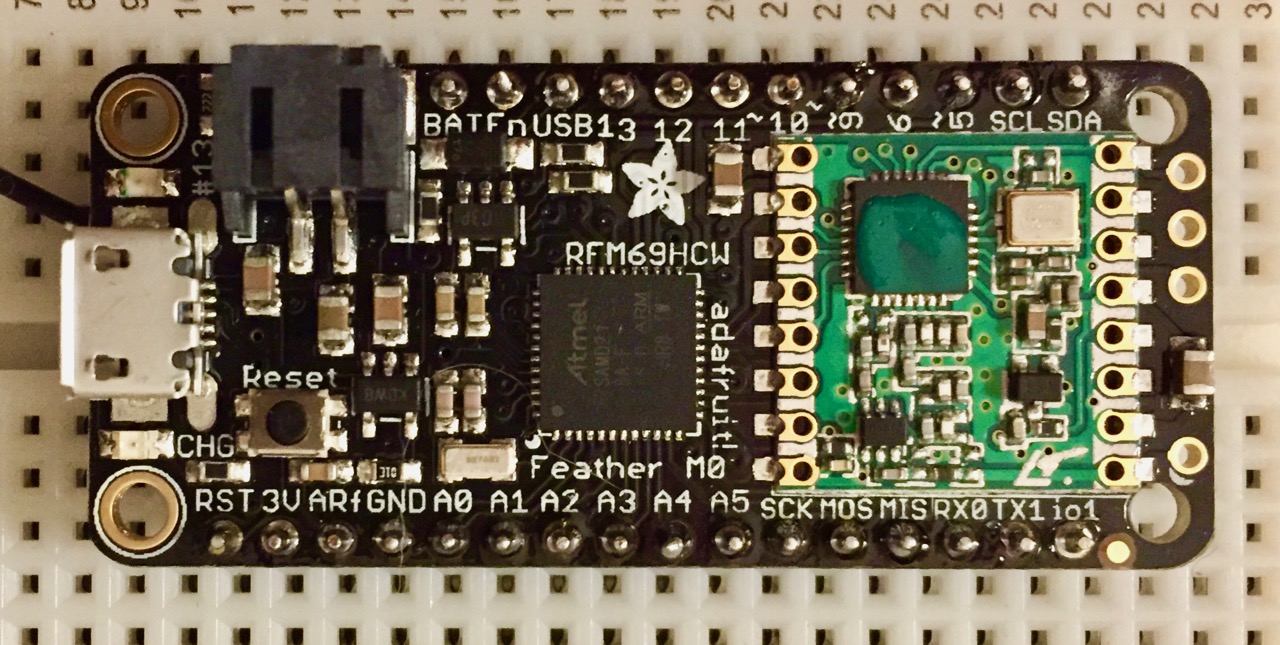 To use the transceivers, you're going to need to use an Arduino library. Adafruit discusses these in one of their articles on how to use the Feather RadioFruit boards. They recommend AirSpayce's Radiohead library. Following Adafruit's recommendation I did a fair amount of digging into this library and followed the examples on the Adafruit website. It let me set up the two RadioFruit's as a pair and transmit and receive data between them proving that they were both working. However this library is heavily geared towards people setting up the radios to work as pairs or in a network you control. It's not really setup for people trying to snoop into an existing radio setup. The other library they suggested was LowPowerLab's RFM69 Library. This is the library that It's science, but works like magic uses. Again I dug into the library and this one is more hacker friendly :-).

So the next phase was to begin porting the code from It's science, but works like magic to the Feather 32u4 RadioFruit. I was making some progress with this and was getting a clean compile, but wasn't picking up any radio transmissions from the ISS :-(.

Then I found a very useful project on GitHub called Hydrosense. HydroSense/FeatherM0 Davis ISS rx on GitHub is a port of another project (Kobuki's VPTools) that has been ported to run on the Feather M0 RadioFruit. Interestingly, looking at VPTools, it turns out it's based on the original code from It's science, but works like magic, so everything comes back to a common ancestor. However that gave me a short cut, it's already adapted to run on the Feather M0 RadioFruit so I could use it as a quick test to see if the Adafruit RadioFruits could at least pick up data from my ISS.

Downloading and compiling it on to my M0 Feather RadioFruit, it started to pickup transmissions. Hooray!! Hypothsis proved. The RadioFruit will work. It's always much easier to push forward on a project when you know that what you're trying to do is technically possible :-)

However it's not all roses, the example I ran, FeatherM0_Davis_ISS_rx.ino, is dropping a LOT of packets (like 90% of them).

One thing that struck me, looking at the various examples in these projects, is they are all introducing a lot of complexity. They all try to follow the frequency hopping that the ISS uses by various means. They're trying to provide most or all of the functionality of the VP2 console. And some of them are sleeping the radio between packets to save power. This isn't really surprising as they're all based on the original work from It's science, but works like magic.

However I have a different goal in mind and so I want to start from a far more basic standpoint. I just want to capture, timestamp and export the the base data from the ISS to a Raspberry Pi for detailed processing.

So the current plan is -

I've also ordered a DS3231 Precision RTC FeatherWing and an Adafruit BME280 I2C or SPI Temperature Humidity Pressure Sensor. Once the RadioFruit can receive data from the ISS, I'll add these modules so it can report barometric pressure, and internal temperature and humidity. 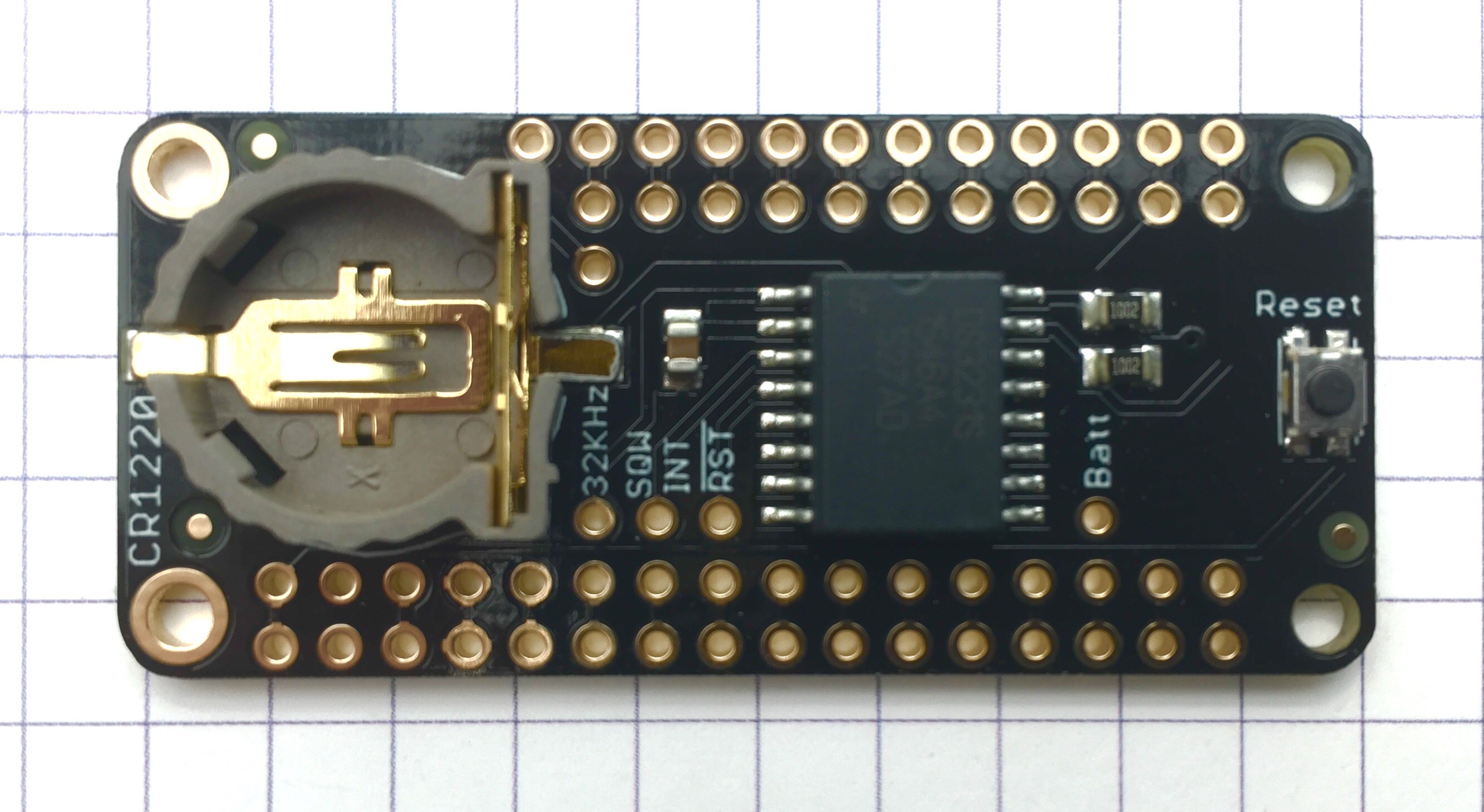 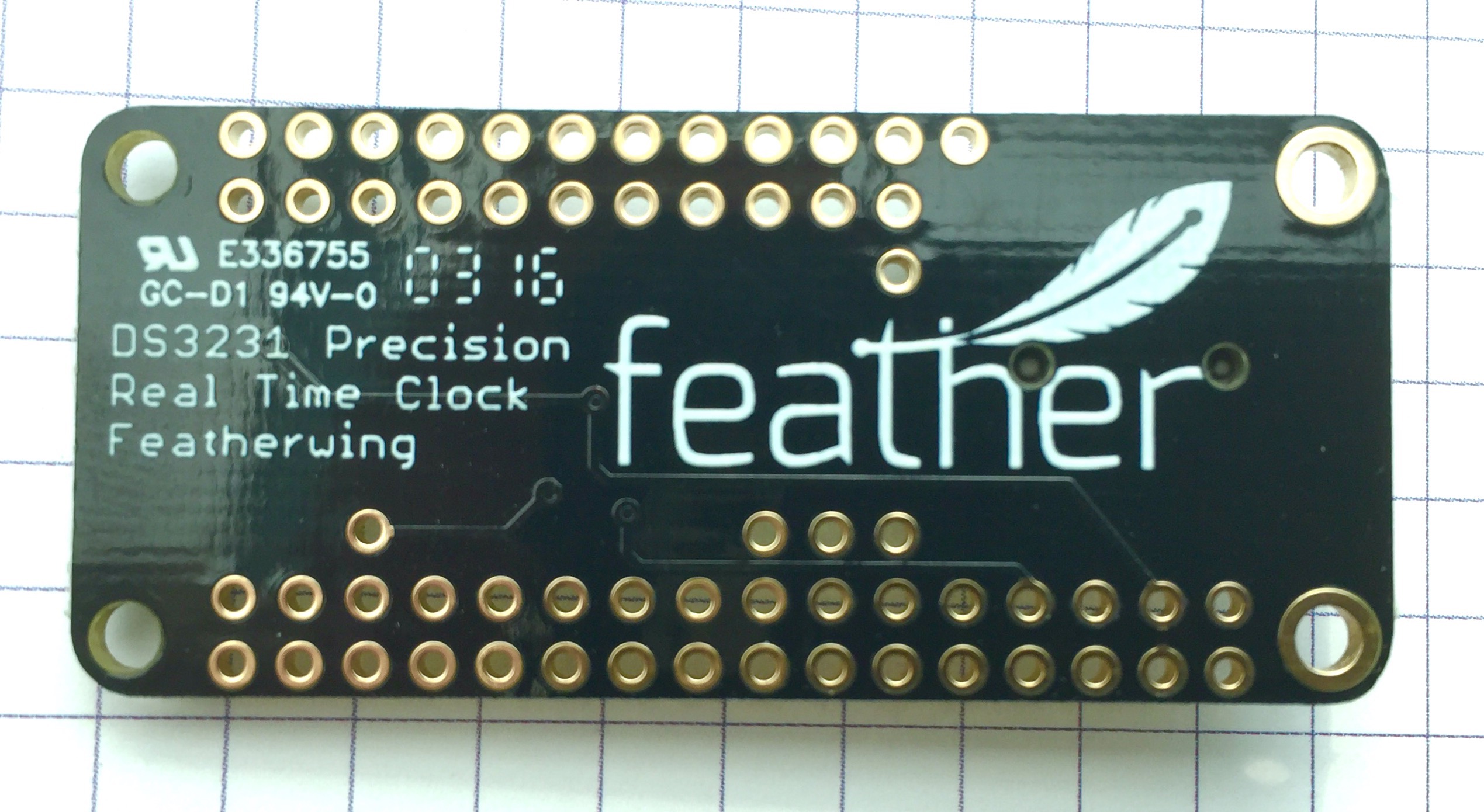 An advantage of using the BME280 is it can easily be mounted remotely from the Feather and the Raspberry Pi by using a bit of wire. It could even be mounted in a proper temperature sensor housing. This gets round the problem that the VP2 console has with the temperature sensor being mounted on the PCB within the console. If you have a VP2 turn the backlight on and watch the "internal" temperature climb :-) 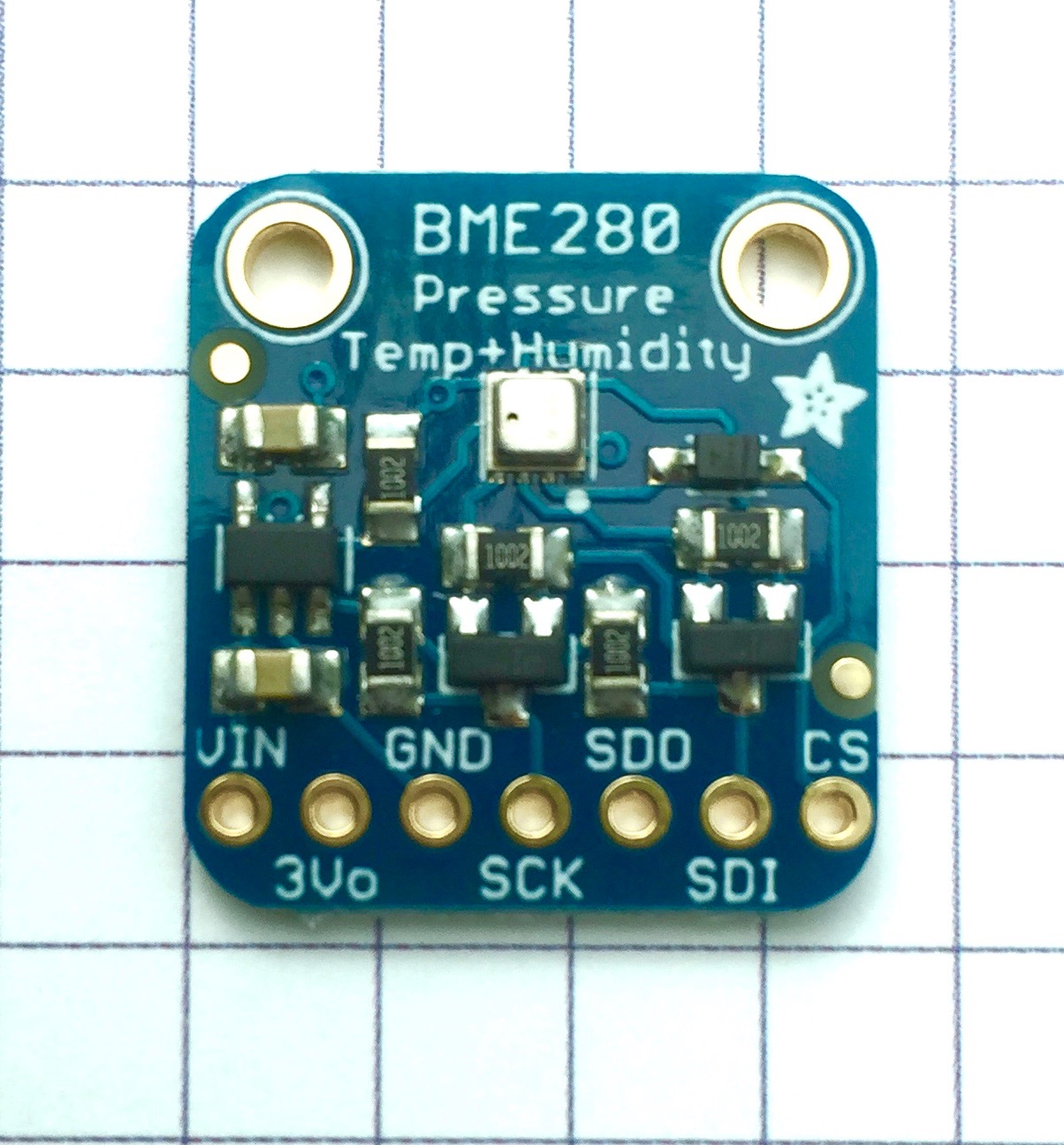 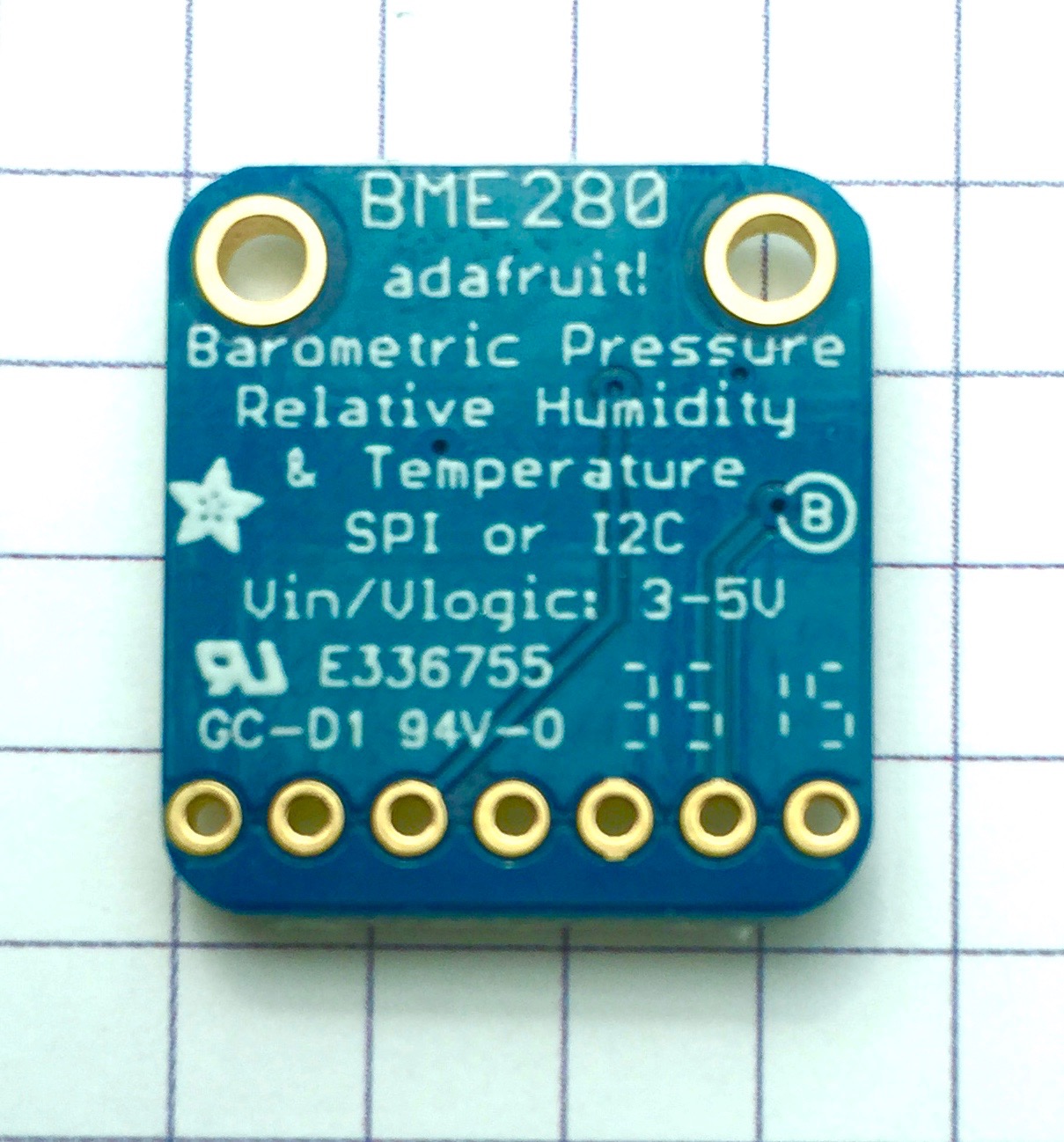 The RTC will let me timestamp the readings before I send them to the RPi. I'm envisioning something like …

At the moment I'm not planning to decode the ISS message on the Feather. The Feather will be kept light and fast. The actual decoding of the message will be done in Python on a Raspberry Pi, and the Raspberry Pi will store all the data in a database.

Side note: I'll need to build in a way to let the RadioFruit set the time on the RTC from the Raspberry Pi, given I'm only anticipating logging a message every 2.5 seconds it's not too time critical.

This differs from the approach outlined in the It's science, but works like magic. blog where they programme the Moteino unit to completely replace the VP2 and emulate it so it responses it appears to the outside world as it it's a VP2. This means existing weather software can easily connect to it.

I want a more flexible approach so I can overcome the limitations of the VP2.

During the research for this post I also came across this little beastie - the Ambient Weather AirBridge. Essentially they've done what I want to do but with one key element missing. I want to have local repeaters that can display the weather data within the house. Plus there's also the cost.

In the Spring, I have counted 136 different kinds of weather inside of 24 hours. - Mark Twain

Join the newsletter to receive the latest updates in your inbox.

Part 1 discusses the Davis Vantage Pro 2 Weather sStation and the theory of a possible way to hack it and enhance its functionality. I have a home blog that's currently hosted on a Raspberry Pi 3 using Automattic's Blog-In-A-Box WordPress system. So far I've only come across one limitation. When I tried to install a new theme, I was promoted for an FTP user-id and password. I tried various combinations of the user-id's